Categories Menu
Home » Brooms » And the year starts to wind down…

And the year starts to wind down…

We’ve finished another show. The packing and unpacking are done and we’ve taken a day or two to put up our feet and relax (well, I did… Jeanette went to a gift show for work and, when she got home immediately dug out her spinning wheel so she could start spinning). And, how did the show go? Very well, thank you. The icing on the cake, though, was the unannounced contest. Seems the show’s organizer, the indefatigable Becki Dahlstedt (who’s celebrating her birthday today!), got together with the ad reps from the local magazine to come and judge the show. The best booth would get next year’s booth fees paid, second place would get 50% off and third place would get 25%. We won second place!

Then, adding to the feeling of a year winding down, we went to the Ozark Folk Center’s annual Christmas potluck party. Elena baked two delicious quiches featuring our eggs and goats’ milk cheeses for us to take and they were a hit (gone in about 5 minutes!) Jeanette had worked that day, so she made a quick dash home to get me and the quiches and if we had been gone 5 seconds longer, we’d not had a place to park. Talk about a jam-packed event. I’ve never seen so many people attend this event (and that’s a good thing!) Part of the method to the madness of the Christmas potluck is to share information. The park was down a bit this year, but not significantly… there’s always room to improve. But for all that the visitation was down, many of the other numbers were not. That was nice. Once the numbers were shared, awards were presented. Each year, a ballot is passed around to everyone at the park (and that’s a lot of people!) giving them a chance to vote for Musician (or group) of the Year, Crafts Person of the Year, Volunteer of the Year, Hospitality Person of the Year, Employee of the Year, and The Miss Bette Rae Miller Spirit Award. 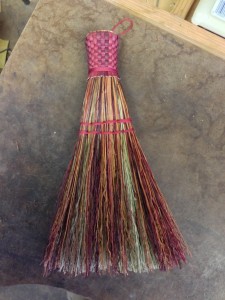 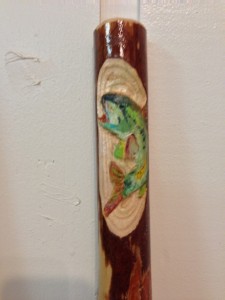 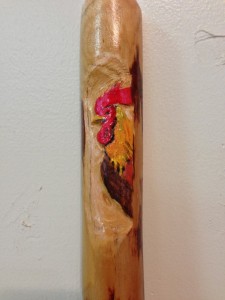 Rooster carved into the handle of a custom ordered broom

There are 2 orders in the shop that need to be finished and will be shipped by Monday, and another package to be shipped besides. There are updates to be made to about half of my websites (WordPress 3.5 was just released and that means work!), but that will be taken care of in short order. There are a few invoices to deal with and maybe a bill or two. But, none of this is happening with the sort of intensity it was a couple months ago. The year is coming to an end… Things are winding down… At least until January when I’ll begin to get SweepIn 2013 together!