This year Monahan Partners sponsored a Craft Broom Competition at the Broom Corn Festival in Arcola, Illinois. Pat Monahan said he wanted to give the festival a nudge back in the right direction. Being a part of the group that put together the Artisans Market on the Square, I could completely understand what he was shooting for and where he was going. 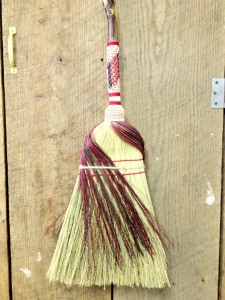 This isn’t the broom I entered. This is one of the prototypes. We ran against the deadline for shipping and forgot to take pictures of the final, finished projects.

Lena and I spent some time in the broom shop discussing the contest and whether we wanted to enter. There were some issues with Mr. Monahan’s proposal. For starters, all entries became property of Monahan Partners. That means that if we didn’t win something, we were out a broom and shipping and and and…

Still, this was an opportunity to promote the craft broom business and ourselves at a well attended, targeted event.

So, with no thought of winning, we put forth our best efforts.

Ah, but if we did win… Monahan Partners were putting up $1000 in prize money! 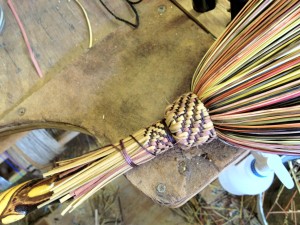 Lena’s broom in progress. Note the detail in the plait.

I sent in a double wrapped parlor broom with a newly created twisted plait. I also sent in a beaded hearth broom. Lena sent in one of her RV brooms with a extraordinarily detailed herringbone plait.

Finally, after what felt like about 4 months of waiting, while eating supper with Jeanette in a cute little Thai joint in Mountain Home, AR (after her eye doctor appointment), I got an email on my iPhone.

There were 14 brooms entered by 12 people. I won. Lena was 4th. Our broom shop is, for a while anyways, home to the top 30% of all craft broom makers in the US.

When our letter with the awards came, there was a special treat. A personal note from Pat congratulating us and saying he preferred Lena’s broom but had to abide by the judges’ choices.