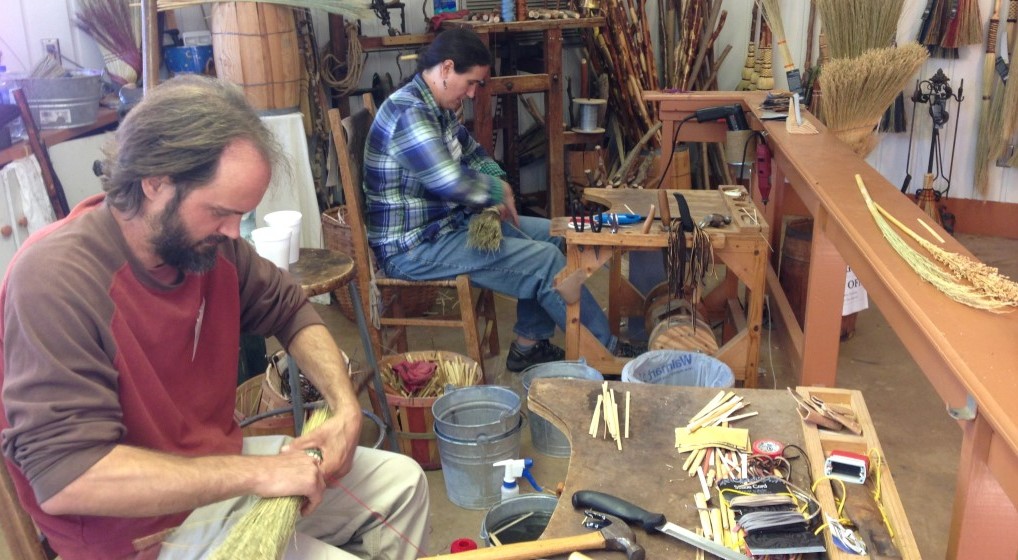 Brooms have been around as long a mankind’s need to remove waste. At first a branch with twigs served fine. Later, the twigs were tied onto a sturdier branch that acted as a handle. You can still find these tied up twig brooms in some parts of the world today. In fact, were it not for the development of broomcorn, you might be using one yourself.

Broomcorn — which isn’t a corn at all although it kind of looks like one as it grows — is a member of the sorghum family. This sorghum, however, can send out a seed tassel in excess of three feet long and it’s this seed tassel that we use to make brooms.

Broomcorn which is cut and shipped with the stalk attached and the seeds removed is often referred to as craft corn. Broomcorn that’s been trimmed and sorted is called hurl. The remains that do not fit in either of these categories because of its lack of length or aesthetic defect is often sold as insides to be used inside the brooms where they can’t be seen, but are just as useful as the more desirable hurl.
There are many styles of brooms!

But there are only a few methods used in tying a broom. Today you’ll learn two methods: standard and parallel ties. These two methods are the foundation for any other broom you’ll ever want to make!
Before you begin, you’ll want to take note of the tools and materials

This set of instructions is written a little more concisely as many of the terms and methods have already been discussed in the standard whisk section.

The bristles are trimmed off of this broom in the same fashion as the standard whisk. The sweep on this broom is normally trimmed by eye with scissors. This broom is not stitched. We will be plaiting this broom, time permitting.

I read this word and variation of it in story books as a child. Of course, I always pronounced it ‘plating’. I always thought it meant braids and braiding as it was always used to describe a woman’s hairstyle. Imagine my surprise when I was told to pronounce it ‘platting’ and that it was weaving! Then imagine my confusion when I learned that the finished product is often referred to as a Shaker braid!!

Before any of the following steps can be taken, you’ll need to have some reed or stalks trimmed and soaked. In the case of the stalks, they need to be split in half or in thirds before beginning the soaking. It sometimes helps, too, to remove some of the pith. The leather only needs to be dry, supple and cut into strips.