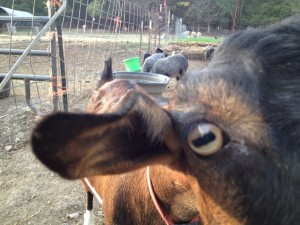 Here’s looking at you! Yampa, the Oberhasli goat, is curious about the camera

Shawn had grown up with goats. His mother and father had Nubians and Toggenburgs on their small farm in northwestern Colorado. He would help with the feeding and milking and he definitely helped with the drinking of the milk and the eating of the home made cheeses.

Jeanette had also had goats. She had raised Saanens and Alpines. She had also made cheeses.

Imagine, then, the difficult time they had coming to a consensus on the breed to raise when they got together.

It was at our favorite Colorado sale barn in Fowler that the decision was made. A goat came through the sale with a great conformation and a huge, but well-formed udder. We bought her and took her home and then we noticed that she had no ears. Talk about tunnel vision!

That goat, we named her Queen Vic when we decided this would be the beginning of a new flock, was a LaMancha dairy goat. Although their lineage is not well known, most figure that they were bred from Spanish short-eared goats and started showing up in Mexico and South America in the early 1900s. The American LaMancha breed was first recognized in the 1950s and the breeding standards were formalized in the 60s to allow for gopher ears or elf ears. We have both!

What makes this breed special, besides the ears, is their hardiness and great milk production with high butterfat content. We love ’em!

We also added an Oberhasli, Yampa, that has become the boss of the entire herd.

Here’s looking at you! Yampa, the Oberhasli goat, is curious about the camera