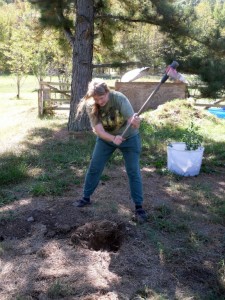 Talk about organic. Our garden is organic organic. As we think up an idea, we try it.

The problem we had in starting a garden – and we have tried several times – is, well, goats. The lean through fences, jump over fences, crawl under fences, and eat just about everything we plant. This year, we thought to try something different. We moved the goats to one side of the property, and put the garden on the other side. Fences withing fences with cages…

The idea for this new garden came when we were given about 30 rock pallets (regular pallets with wire cages attached to hold the rocks in). We took the the cages off of the pallets and lined them with bits of unusable wool and then filled them about halfway with dirt.

In those rings we planted tomatoes, peppers, potatoes, basil, English peas, Asparagus, Beets, and more. Between the cages we mulched, and tromped, and mowed. On one side of these, we dropped a couple straw bales and planted some chard between ’em. On another side, we planted a row of blueberry bushes and a lot of strawberries.

We also had a lot of logs, and Jeanette read a story about a process called hugelkultur. We planted a couple batches of sweet potatoes. One batch on softer soil worked great. The other, not so much… Maybe next year after the underpinnings of our hugelkultur pile has worked down a bit more.

Of course, the asparagus wont do anything for a couple years. Nor will the blueberries. But the basil, English peas (until the drought hit hard), potatoes, beets, tomatoes, and peppers did real well in their little cages. Funny thing about the strawberries, though, I saw them start to ripen, but I never got any of ’em. But Jeanette’s lips often tasted like strawberries… I thought she disliked flavored lip balms…

Potatoes in the round garden bed