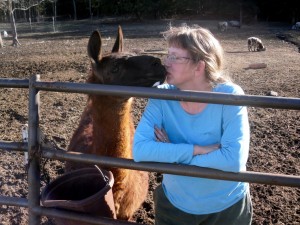 We had dairy goats, horses, and chickens, and, at night… way off in the distance and sometimes not so far off in the distance… coyotes. We had dogs, but it’s a time consuming process getting the dogs out of the house and to the scene of the crime.

While we were debating, a local boy who had purchased a couple llamas for one reason or another and decided that they were more than he bargained for, offered them to us for $25. Not $25 each… just $25. Of course, we bought them. Named ’em Yoda (because of his lop-eared look) and Butterscotch (because of his coloring), and brought them home.

Turns out the books were right: Llamas are great guardians. And they produce fiber, too.

Llama and wannabes – every year there are a few goats that decide that when they grow up they want to be llamas and they follow Pequena everywhere.